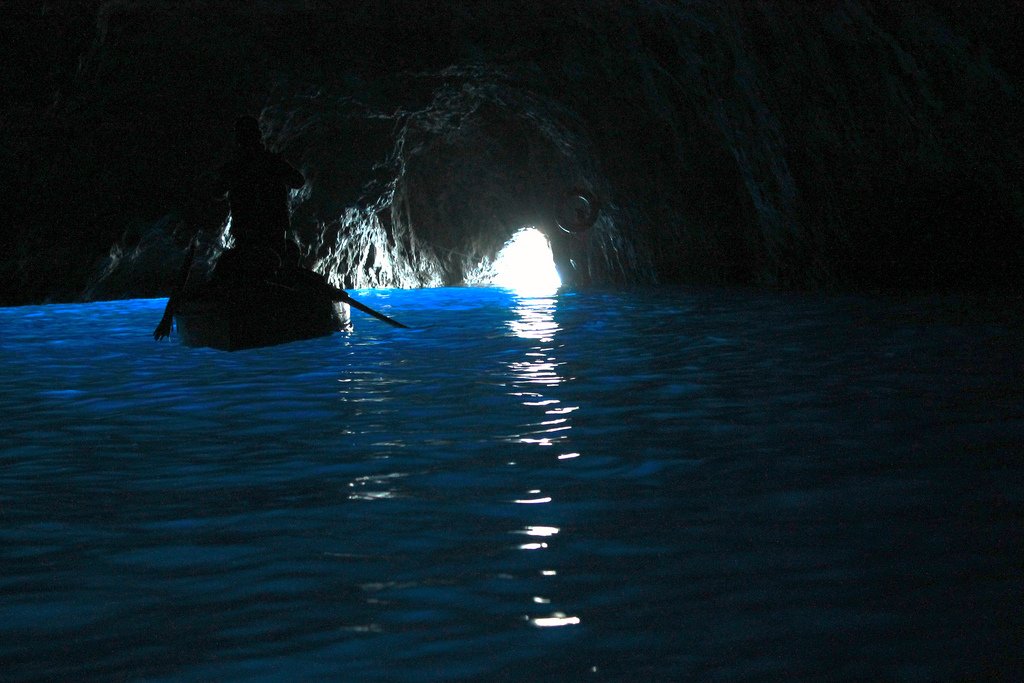 The real gem of Capri’s coast is the Blue Grotto, a cave that for its shape has become famous through History as a magic place, enchanting everyone from the Roman Empire until today.

Capri, the legend of Blue Grotto

Grotta Azzurra: unique cave, 60 meters long and 25 meters wide, not visible from the outside due to its extremely small entrance, which is also the only access for the sunlight. That is why, the inside of the Grotto is very dark, and the water has a unique bright shade of blue thanks to the very little light reaching the inside. Due to its features, the Blue Grotto is a legendary place. It was already known by the Romans, and it is said that the Emperor Tiberius, who lived in Capri for 5 years in luxurious villas and famous for his cruelty and his orgiastic parties, used it as a personal pool, where he used to swim with boys and girls. He would reach the Grotto through a (now destroyed) private passage along which there were Roman statues representing sea creatures such as Neptune, god of the sea, and Triton his son. In fact, thanks to these statues, and its dark atmosphere, the Grotto was later totally abandoned, as it was believed that sirens and spirits lived down there. Nobody dared to enter the cave, until, in the 19th century, it was rediscovered and became a major local attraction, the symbol of Capri.

Blue Grotto Tours: through a stone portal to another world

Nowadays, the Blue Grotto is a real celebrity. It can be admired from the sea or visited but it is only accessible on a rowing boat through a very narrow channel. You will be asked to lie down in the bottom of the boat while going through the low access. It is, indeed, strictly forbidden to swim through the channel and inside the cave. Experienced skippers will accompany you and the tour on a small wooden rowboat inside of this blue, dark cave with shiny waters will be magical. An experience that, everyone who had it can tell you, you should have once in your life.

Don’t miss this chance: the best way to discover Capri is a Capri Boat Tour along the coast to visit the White, Green and Blue Grottos (entry ticket not included in the price of the tour), the Marina Piccola bay, the Faraglioni, up to Marina Grande harbor accessing the island streets for some shopping and a taste of Dolce Vita. What are you waiting for?